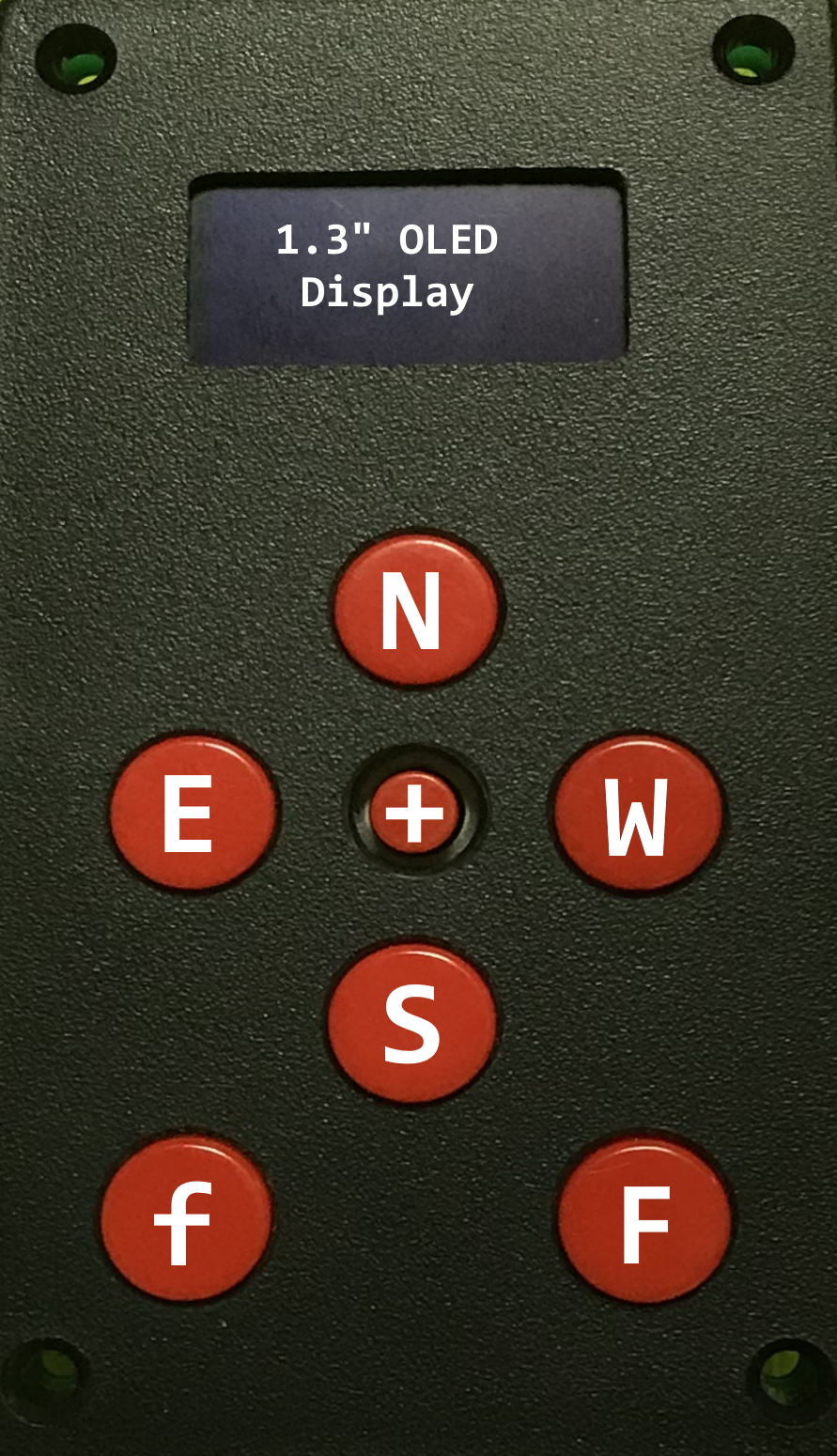 When the SHC is powered up an "OnStep w/Teen Astro" splash screen will appear for a few seconds then it'll tell you it's trying to connect.  At this point the SHC presents a signal to OnStep on it's ST4 port to indicate that a SHC is present.  After a couple of seconds OnStep re-configures the ST4 port lines for synchronous serial comms and the SHC will start displaying the status information across the top line (guide rate, pulse-guide rate, and a series of icons as described below) and the RA and Dec below that.

North when tracking or Scroll Up while in Menu's

East when tracking or Back while in Menu's

West when tracking or select current option while in Menu's

South when tracking or Scroll Down while in Menu's

Note: The Center button [ + ] on recent models is now a 5-way switch that, in addition to a normal switch

Telescope is at home position. Tracking is OFF

East side of pier. Declination is between 90 and -90

Telescope is slewing to park position

The following is a map of the menu structure of the SHC as of version 3.x.

[Due to a memory size constraint the Teensy 3.2 based SHC has compact versions (lower coordinate precision) and subsets for all catalogs]

[Define filters for catalog objects displayed on 'Stars' and 'Deep Sky' menus. If the selection as displayed is prefixed and suffixed by a small dot it means a filter has been set for that property. Initially, the 'Above Horizon' property is the only one set]

[for selections other than All, the magnitude is followed by an estimate of the minimum telescope aperture required to see the object]

[You can enter arbitrary RA/Dec coordinates here (e.g. comet or asteroid coordinates obtained from sources like a planetarium program)]

[New as of version 3.02a. If your alignment is poor and a 'Goto' did not put the object in the field of view or you want to browse around an extended object like M42 in a spiral pattern, this function initiates a spiral search at the current guide rate around the current position. Press any button to stop.]

[New as of version 3.02d. If you didn't locate the object using the Spiral Search function, perhaps because it was moving too slowly or too quickly, this option will return to the last used 'Goto' coordinates where you could change the guide rate and try again.]

[Will prompt for confirmation of model clearance. Use N/S to toggle Yes and No ('Yes' clears the model and returns to the home position, 'No' aborts the Goto Home command). If you do not want to lose the model because the telescope will not be moved since the last alignment you should use the 'Park' function.]

['Stars', 'Deep Sky' and 'Solar System' will sync the telescope to the coordinates of the object selected without moving the telescope. You are expected to have centered the object already]

[syncs to the last Goto coordinates]

[when powered up at park position following use of Park command in previous session, restores the alignment model and starts tracking]

[The following 3 selections set the tracking rate to the standard for stellar objects, the sun or the moon]

[compensate for atmospheric refraction only]

[turn off all compensation]

[apply compensation to both R.A. and Dec axis]

[Record a new PEC buffer or average in an additional cycle]

[Save to non-volatile memory. PEC is not permanent until saved using this function]

[Select one of 4 user-defined sites. If the controller gets site data from a GPS, when received it is always stored in 'Site 1' with the name of 'GPS']

[this is the inverse of your timezone offset, e.g. +5 for North American Eastern which is defined as -5 as a time zone. Do not adjust this for Daylight/summer time... the stars don't care about that]

[Press any key to turn on. That first key press is ignored so there's no worry it will cause a telescope motion]

[blanks display after key inactivity interval. On the wireless SHC it is advisable to use '1 minute' so that the unit spends the maximum amount of time in low-power mode.]

Buzzer [On or Off]

[This menu is only available for GEM mounts]

[If a meridian flip is possible at the current coordinates, do it now]

[Should OnStep do meridian flips automatically when hitting the meridian limit when tracking from east to west?]

[When meridian flips go via the home position, should OnStep pause the telescope at the home position to allow the user to verify that no cabling is about to snag? If off, an error will be thrown and tracking stopped when the Meridian West Limit is reached. Requires a button press to continue]

[sets gear backlash for axis 1 and 2]

[Sets number of degrees above the horizon that the telescope is allowed to point while tracking or slewing. This is important for Alt/Az telescopes especially because of the 'Dobson hole'. For others it prevents crashing the bottom of an OTA into a pier or tripod.]

[Sets the 'preferred pier side']

[This menu is displayed only if a camera rotator is configured]

[returns the rotator to the zero-degree (middle) position]

[For Alt/Az mounts only, turns on or off the function that runs the rotator at the appropriate speed to compensate for field rotation]

[For Alt/Az mount only, move the rotator to the parallactic angle - the equatorial coordinate angle associated with the current area of sky]

[For Alt/Az mounts only, reverses the direction of rotation of the de-rotator]

Focuser1 [the '1' does not appear if there is only one focuser]
...
FocuserN

[returns the focuser to the home, 'half-travel', position]

[use to synchronize OnStep's 'At half-travel' status with physical reality]

[compensate for geartrain backlash, if any]

[Turn on or off temperature compensation. Controller must have either ambient temperature sensor (e.g. BME280) or TELESCOPE_TEMPERATURE sensor present]

[The temperature compensation coefficient i.e. how many microns (plus or minus) per degree Celcius of temperature change]

[How many microns must the temperature compensation algorithm want to change the focuser position before an adjustment is actually done? This is used to reduce the probability of an exposure being ruined by too many focus changes]

[Center button double tap. Select desired Feature [ N ] [ S ] to scroll, [ W ] to accept then press f or F button to alter selected feature. Depending on configurations not all of these selections may be present]

Focuser1 [the '1' does not appear if there is only one focuser]
...
FocuserN

[Run selected focuser in or out. Starts at low speed, switches to high speed if held >= 5 seconds]

[New as of version 3.02a. A list of the named auxiliary features as defined in the controller's Config.h. After selecting the feature, if the feature is an ANALOG_OUTPUT type, the 'f' and 'F' buttons adjust the value down or up by 5%, otherwise the 'f' or 'F' buttons turn the feature off or on.]